Sigh, this quote is SO TRUE about working out.

I mentioned that I was sick earlier this week with a silly summer cold, which really put a wrench in my workout plans! I did a quick 15-minute arm routine yesterday followed by a few crunches, but aside from that I haven’t done much this week, and inevitably the guilt has set in.

I’m a firm believer in not pushing yourself too hard when you’re not feeling well, but I’m also aware that it’s so easy to make excuses to not work out. I swear, the hardest part about exercise is the mental preparation, it’s crazy!

My go-to work out when I’m not really feeling it but need something to kick my butt (because really, why waste your time on an unproductive workout?) is the Jillian Michaels 30-Day Shred. 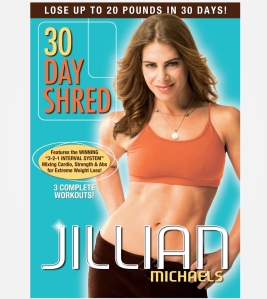 I own many Jillian Michaels DVDs (thanks in part to my sis-in-law for giving me some of hers!), but this one is only about 30 minutes including warm up and cool down. You can pick from 3 different levels, and free weights of your choice. At any level you get some major strength, cardio, and ab action…score!

I like levels 2 & 3, and use 5 lb. hand weights. Once in a while I’ll use 10 lb. weights for some of the easier strength moves, but sometimes that makes me want to throw up.

My little living room set up: 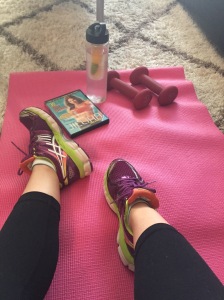 (Not pictured, but AJ loves doing dance moves behind me to the DVD background music.)

And yes, sometimes I feel like a 1980’s housewife doing a Jane Fonda VHS, but mostly I just feel awesome for completing a session 😉 Jillian Michaels does NOT mess around! 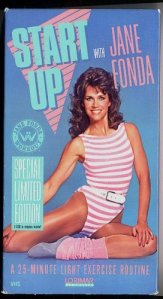 Hooray for Thursday night, it’s time for dinner in our house and AJ’s cookin’!

What’s your go-to workout routine when you’re just not feelin’ it?