Hi there friends! I hope you all had a great weekend. 🙂

I wrote on Saturday about You’ve Got Mail and how it is my all-time favorite movie, and a big part of my love affair with the Upper West Side of Manhattan. So after doing some research and mapping out a bunch of the movie scene locations, we set off to explore them on Saturday afternoon!

1. The Shop Around the Corner

Our first stop was the store front of Kathleen Kelly’s well-loved The Shop Around the Corner. As Kathleen states in the movie,  “I own a store, did I ever tell you that? It’s a lovely store, and in a week it will be something really depressing, like a Baby Gap.” While this location was never actually a bookshop, it’s function today is somewhat drab – it’s a dry cleaners! 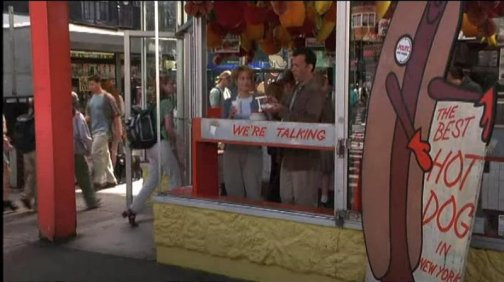 Next, I had to stop by Gray’s Papaya for a hot dog. The recession special gave us 2 dogs and 1 drink for $5.95. Not too bad! It was crazy packed though, so we didn’t get to recreate the eat-in-the-window movie scene. 😦 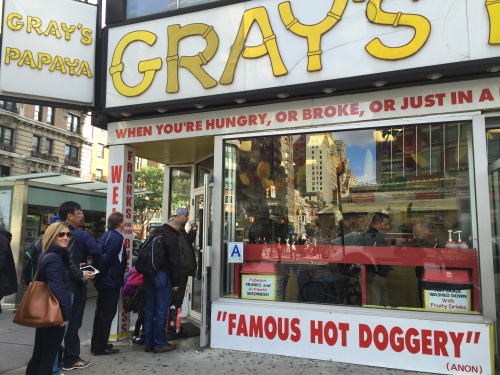 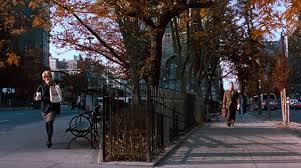 I actually forgot to get a picture of us in Verdi Square, oops! But this is where Kathleen and Joe narrowly miss each other in the opening scenes of the film. They’re also back again towards the end when they’re friends and stop by the farmer’s market. Kathleen tells Joe, “I hope you’re mango’s ripe!”

You might remember the scene where Kathleen spies Joe in the market during a pre-Thanksgiving shopping trip and does her best to avoid him, only to end up in the “cash only” line with nothing but a dollar! Much to her chagrin, Joe comes to her “rescue” and convinces the cashier to “zip zip” Kathleen’s credit card through the credit card machine.

We loved it so much we actually stopped by again on Sunday after church to pick up bagels, cream cheese, and fresh lox to make sandwiches at home! 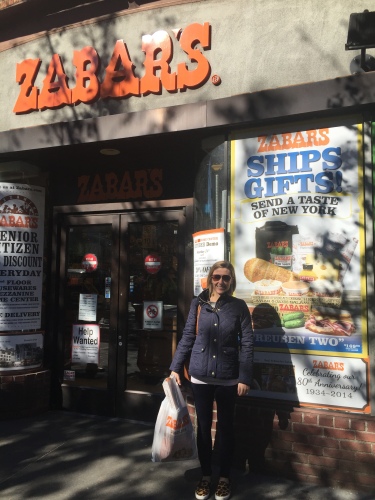 This is the Starbucks where Joe reflects, “The whole purpose of places like Starbucks is for people with no decision-making ability whatsoever to make six decisions just to buy one cup of coffee. Short, tall, light, dark, caf, decaf, low-fat, non-fat, etc. So people who don’t know what the hell they’re doing or who on earth they are can, for only $2.95, get not just a cup of coffee but an absolutely defining sense of self: Tall. Decaf. Cappuccino.”

I was tempted to order a Tall Decaf Cappuccino after Zabar’s yesterday, but given that I actually didn’t want a coffee, I held myself back 😉

The scene at Cafe Lalo is one of my favorites from this movie! It’s when Joe brings along his sidekick (Dave Chappelle) to check out “Shopgirl” before going in when they decided to meet up. When they discover it is actually Kathleen Kelly, Joe first leaves,  but then turns back around and pesters her while she sits alone. All the while, poor Kathleen thinks she is stood up by her mystery internet pen pal.

We stopped in for a quick brunch of a goat cheese quiche (which we split); AJ got a cappucino and I got a mocha cappucino (which unbeknownst to me until yesterday, was the same drink Joe orders while sitting with Kathleen!). We were there during peak brunch hours on Saturday, so looking forward to coming back for coffee and dessert some night during the week when it isn’t quite so crowded. 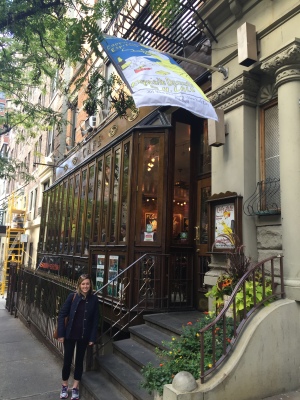 Okay, so this location was a bit tricky. As you might recall, Joe’s address was 152 Riverside Drive (his AOL screen name was NY152), however that address does not actually exist! The exterior and elevator scene was shot at 210 Riverside Drive, which was on the corner of 93rd Street. (If 152 Riverside Drive did exist, it would be between 87th and 88th Streets.) 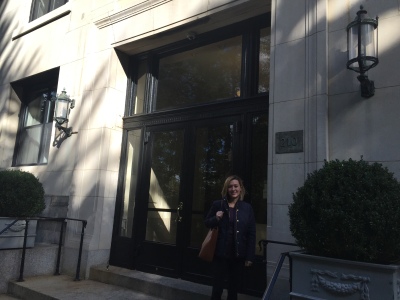 Confession, I already scoped this spot out before our little day tour, but it was so much fun to go back! Of course I had to do a little photo shoot on the stoop and hope that no one who actually lives there came out. As we were walking up the street, I said to AJ, “Can you imagine if we found an apartment in this brownstone when we were apartment hunting? We would have to live here no matter what!”

“I wanted it to be you. I wanted it to be you so badly.” Finally, Riverside Park where it all comes together! I tried to make AJ re-enact this scene with me, but he did throw me an obligatory, “Don’t cry, shopgirl.” Such a beautiful park, I love that I get to run through it on my neighborhood runs! 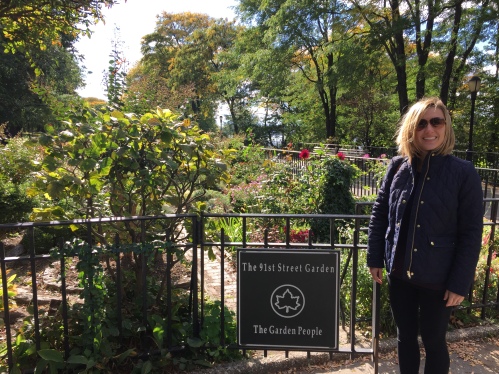 You remember the scene where Kathleen goes to the movies with her boyfriend Frank and they get into a fight because Kathleen went for a manicure and “forgot to vote” in the last mayoral election. She storms out of the theater and they end up going to dinner where they both admit they’re not in love with each other.

I’ve actually been to this movie theater (AMC Loews Lincoln Square 13) a bunch of times. I wish they would play You’ve Got Mail in this theater…now that would be something! 😉

Joe keeps his boat in the Boat Basin marina. It’s where he also meets up with his half-brother (Matt) and aunt (Annabelle) and they shout out, “Hello, New Jersey!”

This marina exists in real life, and the Boat Basin Cafe is one of my favorite spots in NYC in the summer! It’s a restaurant and bar built into this old stone structure underneath the Henry Hudson Parkway. It overlooks the Hudson and really does provide spectacular views (of New Jersey).

Kathleen comes here with her friend and colleague Birdie to discuss the future of the bookshop. Barney Greengrass is a well-known Jewish deli in the neighborhood, and they’re famous for their Sturgeon. Their bagels with lox aren’t half bad either!

We actually haven’t eaten here, but it is on the short list. Located directly across the Museum of Natural History on Columbus Ave, Ocean Grill is a well-reputed seafood restaurant. In the movie, Joe and Kathleen come here as their friendship strengthens and discuss what the screen name “NY152” means. “152 people who think he looks like a Clark Bar.”

And there you go, this was the epitome of the perfect New York Autumn Saturday for me! If you’re ever looking to do your own tour of You’ve Got Mail, I hope this list helps you! 🙂

“Don’t you love New York in the fall? It makes me wanna buy school supplies. I would send you a bouquet of newly sharpened pencils if I knew your name and address. On the other hand, this not knowing has its charms.”

8 thoughts on “You’ve Got Mail: A Self-Guided NYC Tour”