I’m a little late on this weekend’s recap, but as I had mentioned, I was in Pennsylvania for the weekend and didn’t get back until late Sunday night and opted for bed over blogging. So today’s post is a weekend/Monday recap!

But important things first. The reason for my trip home was to honor of my dad’s retirement! After 49 years (and 3 generations) of hard work in the family business, my dad decided to retire. To be honest, this decision was a bit of a shock to us because we expected him to work forever! I mean, he started working with his father and grandfather when he was just 16 with barely any time off in all these years. But we’re all so thrilled he decided this was the time to step away and enjoy this well-deserved retirement!

He was honored by his business associates with a Sunday afternoon brunch at the Irem Temple Country Club in Dallas, PA. After our meal and some sweet words shared by a few of his co-workers and my mom, my parents were surprised with a 10-day trip along the California coast later this year! This is so exciting for them since they are not ones to plan vacations for themselves, so I’m go glad they’re being “forced” to go on this spectacular trip!

The rest of the weekend was pretty low-key with the family. We spent some time movie and Netflix watching, and looking through some of my dad’s old files he brought home from his office. This included his first speeding ticket and his first-ever paycheck from 1967 where he earned $10.14 for working 8 hours!

I also did some shopping with my mom on Saturday. I ended up getting a dress from Macy’s (pictured above!), and a new black spring jacket, which I can hopefully start wearing soon. We snuck in a quick lunch at Panera Bread too. I always get so overwhelmed with the many options and end up falling back on the delicious Cheddar Broccoli soup and Chicken Caesar salad…Every.time.

When I got home Sunday night, I was greeted by AJ who finally made it home from California earlier that day!

That meant Monday night called for a date night! After work we headed to the show White Rabbit, Red Rabbit starring Nathan Lane!

The idea behind this show is pretty neat, there’s no rehearsal or director, and each night a different actor is given the script right as they step on stage. So you can see this show many times and each time the reading and interpretation would be different from the last. 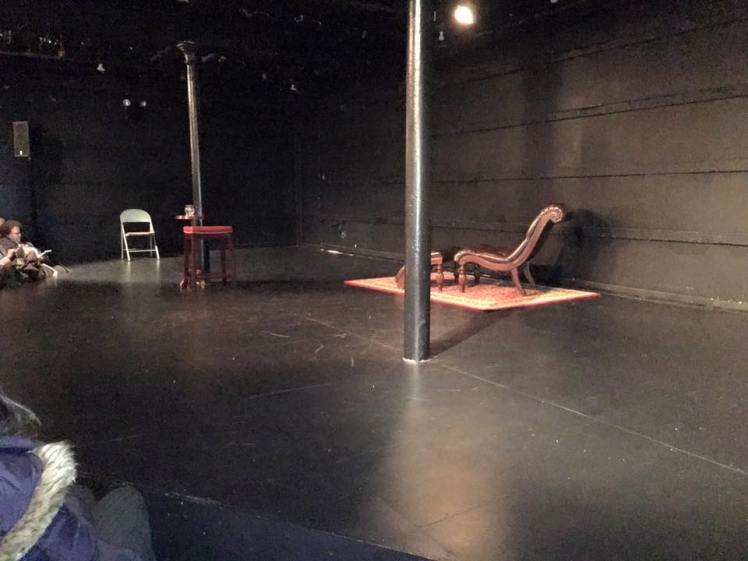 It was held at the Westside Theater which is pretty small and we were in row 3, so it felt like Nathan Lane was talking right to us!

Following the performance we made our way to Tavola for pizza!

Oh, and some homemade tiramisu 😉

That wraps things up for now. I’m super excited about the 60-70 degree temperatures New York is enjoying this week! Hope you’re having a great day 🙂

6 thoughts on “A Retirement, a Play, and a Pizza”